Hit enter to search or ESC to close

The IPL technology is used both in cosmetology and medicine. It can be used to treat various skin related problems such as hair loss, pigmentation, UV damage from sun and enlargened capillary veins. It can also be used to treat skin conditions such as acne; it’s also increasingly used to treat eye conditions that cause dryness in the eyes.

How does it work?

IPL works on the same principle as laser treatments in that the device emits light energy that’s being absorbed to the target cell that is then converted to thermal energy. However, IPL is different from lasering in that it uses several wavelengths instead of only one. The method is quick and painless, and it’s based on the wavelengths of light between 400–1200 nm that are absorbed into the pigment in the hair and the follicle, inhibiting new growth. The light is absorbed into the follicle through the melanin in the hair, heating it up and destroying the follicle. The intensity of the light impulses is carefully selected so that it’s as effective as possible while still remaining safe and painless. Just kick back and relax while our trained professional works on the desired area. 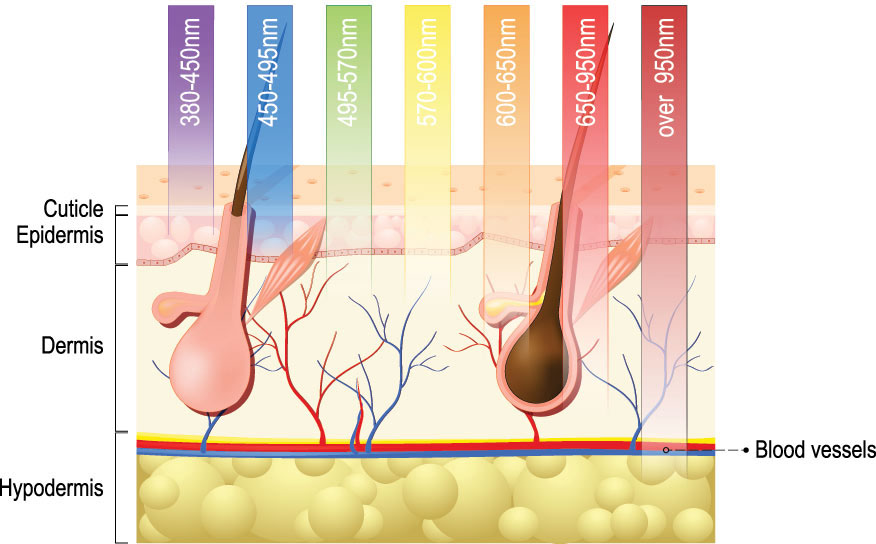 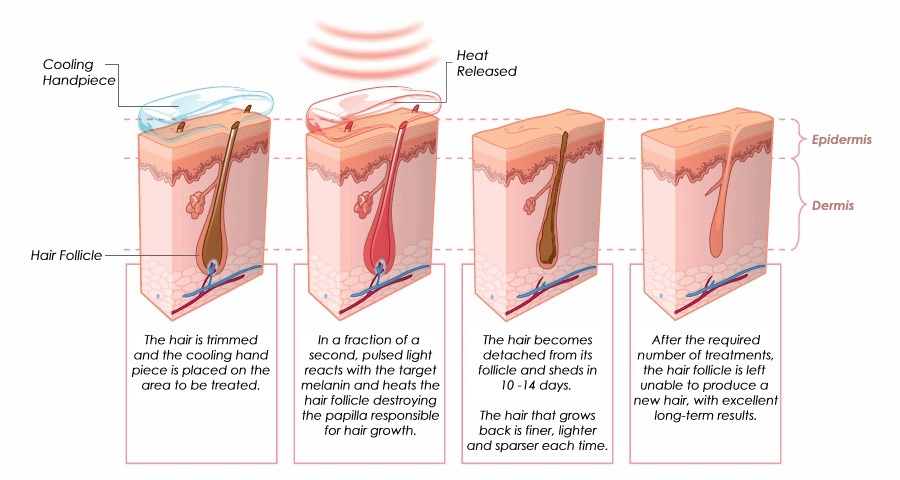 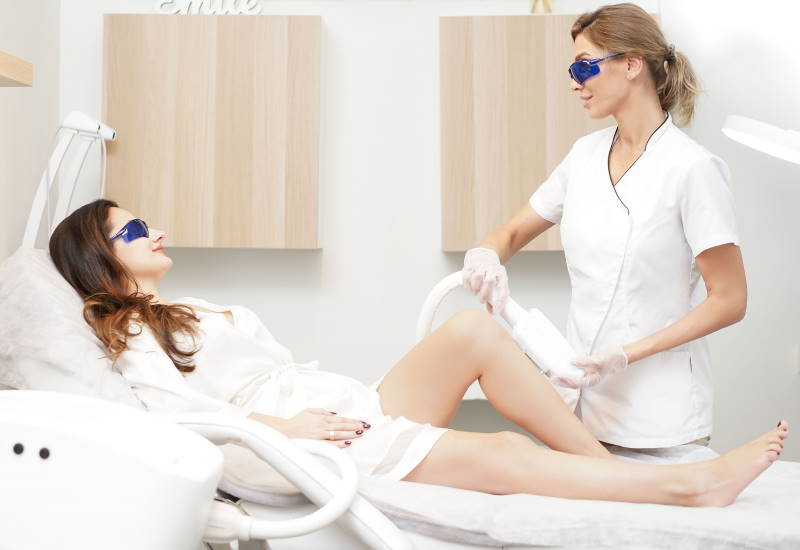 Request offer for more than 1 area 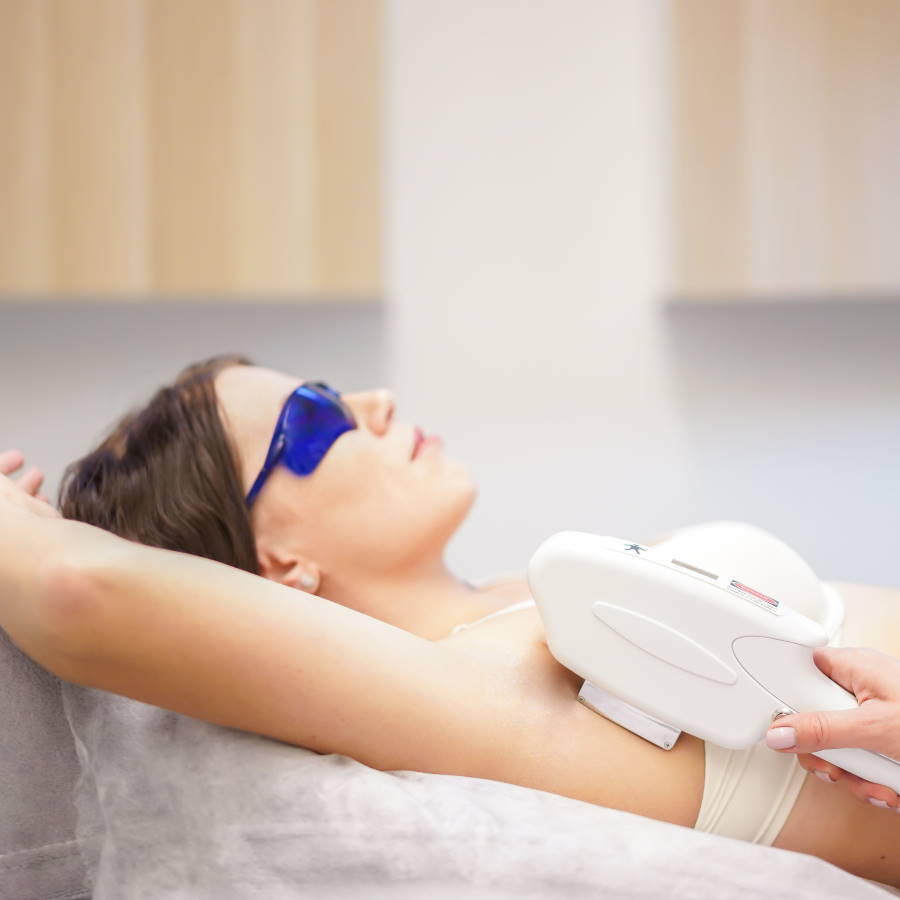 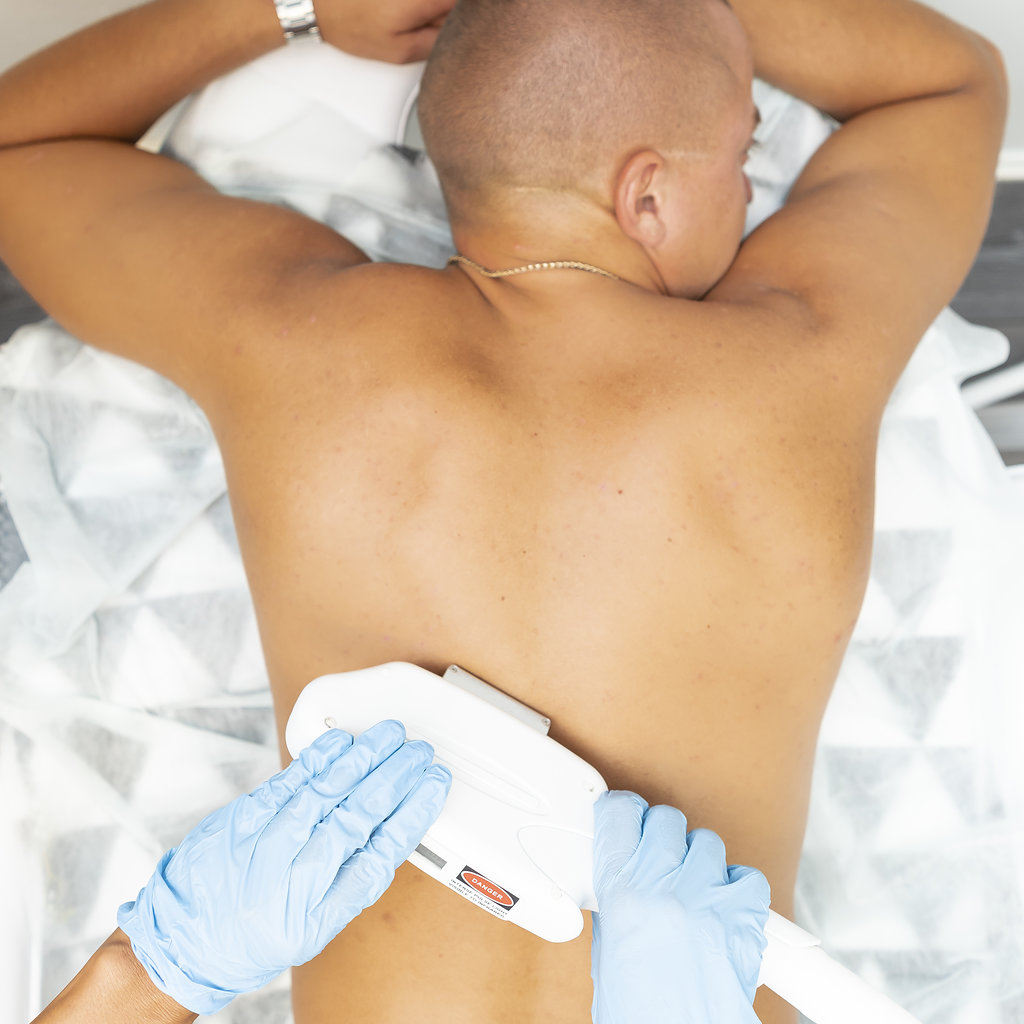 Hair that
we don’t want 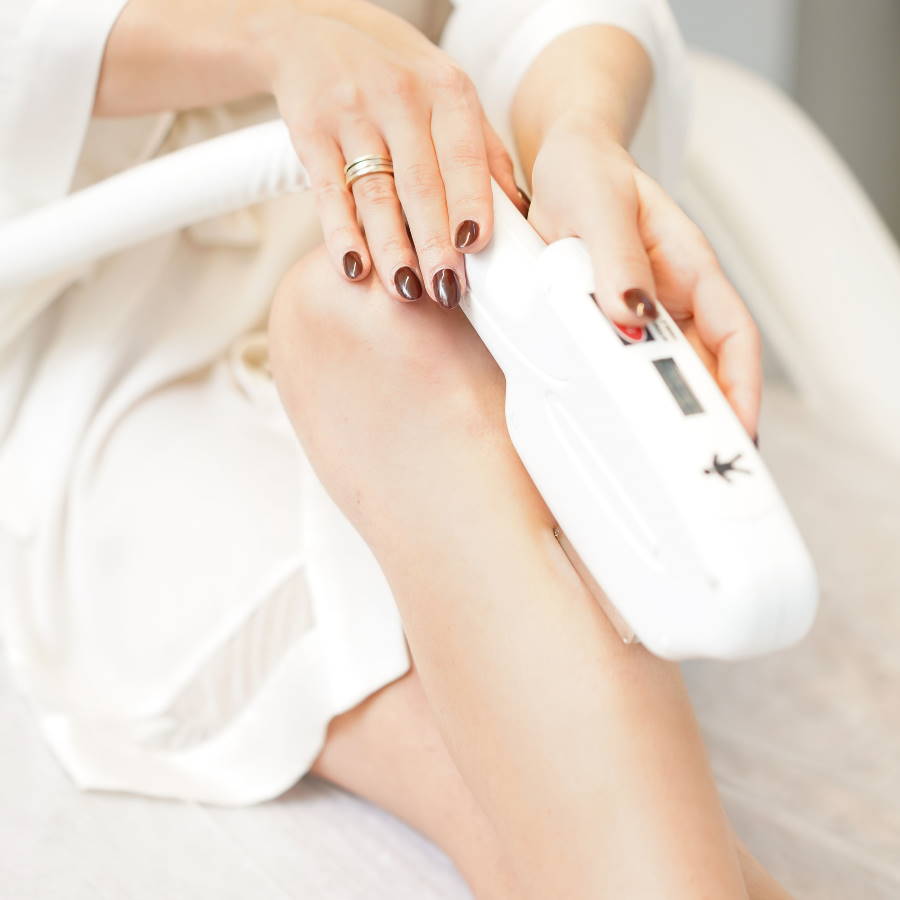 The IPL method is not recommended if you

3 days prior to the treatment, please abstain from:

Are there any side effects?

Unwanted skin reactions are extremely rare. Some areas are more sensitive than others, and some people may experience mild redness, swelling or temporary changes in pigmentation. These symptoms can be reduced within a few hours by using an Aloe Vera gel or a topical cream after the treatment.

How should I prepare for photoepilation?

Photoepilation is always done on hair that’s 1 to 2 mm in length. The desired area should always be shaved 1 to 2 days prior to the treatment. Between treatments, it is not advised to use mechanical hair removal methods such as waxing, sugaring or epilation. If you forget to shave 1 to 2 days prior to your scheduled appointment, please reschedule a new appointment.

Photoepilation – forever or not?

The result is visible after the first procedure. Hair begins to grow thinner and slower. With each subsequent procedure, the result becomes more noticeable. Since exposure to light on the hair follicle occurs in the active stage of hair growth, a course of procedures is needed, since all hair follicles have a different cyclicity of renewal. After a while our body can begin to form new single hair follicles, so to maintain the result it is recommended to take 1-2 procedures every 6-12 months.

Can photoepilation be used on a suntanned skin?

The method can be used safely for all skin types without the risk of burns. A tan skin can thus also be treated, as long as it’s not recently tanned. If you’re planning on intense sunbathing, please abstain from it 3 days before and after the treatment. A sunscreen should always be used.

Can photoepilation be used for areas with tattoos?

Can photoepilation be used during menstruation?

Yes. However, during menstruation you might find yourself more sensitive to pain. For very sensitive persons, we recommend not booking an appointment 2 to 3 days before or after menstruating. After this period, sensitivity is usually reduced.

Yes. However, during menstruation you might find yourself more sensitive to pain. For very sensitive persons, we recommend not booking an appointment 2 to 3 days before or after menstruating. After this period, sensitivity is usually reduced.

Can photoepilation get rid of fine hairs?

Unfortunately no. Fine hairs are body hair without pigment, which is required for photoepilation. Fine hairs grow on our bodies already during childhood and are not a part of hormonal hair growth.

Dental braces or implants do not pose a problem for photoepilation. The light impulse is only absorbed into the hair follicle. It does not penetrate deeper into the skin. This includes both planted and removable implants.

IPL is a well-researched, safe and reliable method for hair removal. Skin reactions are extremely rare; some people may experience temporary mild redness. The light impulses are absorbed into the hair follicle just a few millimeters underneath the topmost skin layer, and have no effect on any other parts of the body.

Is photoepilation suitable for men?

Yes, IPL is totally suitable for men. First visible results can be achieved with just one to two treatments.

How many treatments do I need, and how often?

It is recommended to have a total of 4 to 10 treatments every 3 to 4 weeks depending on your individual situation. First visible results can be observed in just a couple of weeks from the first photoepilation session. Please note that the desired area should be shaved 1 to 2 days before each treatment.